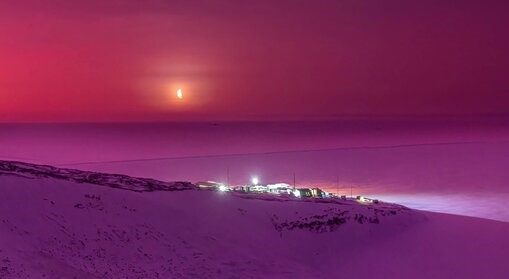 The snowy middle of winter is brilliant in Antarctica, the southernmost continent on Earth. The usually dark skies are now a brilliant variety of orange, pink, and purple colors. Combined to form a phantasm that seems to have come from a utopian dream.

Due to the huge eruption’s afterglow, the Antarctic sky has taken on spectacular purple and violet hues months after the Tongan volcano erupted. On January 15, the Hunga Tonga-Hunga Ha’apai volcano erupted, causing a tsunami and strong atmospheric pressure waves to be transmitted all over the world.

According to James Garvin, the head scientist at NASA’s Goddard Space Flight Center, the explosion had a force 500 times greater than the nuclear weapon fired on Hiroshima in Japan, producing the equivalent of 10 megatons of TNT. After the volcanic eruption, aerosols comprised of sulfate particles, sea salt, and water vapor swirled in the air, bending and dispersing sunlight to produce pink, purple, violet, and blue glow in the sky. According to a press release from the National Institute of Water and Atmospheric Research (NIWA) in New Zealand, these phenomena are known as afterglows.

🌋 The afterglow from the Tongan volcano has now reached Antarctica, causing stunning pink & purple skyscapes like those recently seen in New Zealand 🇦🇶https://t.co/YRVQVN3Xor

She continued that the quantity of cloud cover and haze along the light’s passage to the stratosphere affects the color and intensity of these phenomena. According to a press statement from NIWA, Stuart Shaw, an Antarctica New Zealand science technician stationed at Scott Base for the winter, took the pictures. Shaw explained the breathtaking vistas by pointing out that Antarctica is typically completely dark in the heart of winter, with the exception of a little window in the middle of the day.

However, Shaw told NIWA that this year, they were treated to a pretty impressive spectacle, which had most of the station staff grabbing jackets and racing outside with their cameras to marvel at the wonderful colors.

🗣️ "Usually in mid-winter, Antarctica is nearly continuously dark, except for a slight ‘nautical twilight’ at around midday which means the horizon is faintly visible in good conditions. But this year, we were presented with quite a show…"

If truth be told, he hasn’t even touched these pictures; they are pretty much precisely as they saw them. It’s amazing, he continued.

The missing continent that took 375 years to be found

There were reports of similarly spectacular sunrises and sunsets in regions of New Zealand earlier in June, which experts ascribed to the same afterglow. Antarctica The images, according to Jordy Hendrikx, Chief Science Advisor for New Zealand, serve as a reminder of how interconnected our globe is. We share our sky even if Antarctica is around 5,000 km from New Zealand and 7,000 km from Tonga, he said