Recently after the arrest of PTI member Shahbaz Gill, a wrong picture of Gill’s driver’s wife held in jail has been circulating on social media which was used by journalist Imran Khan and some digital news agencies.

The picture of the lady is from a separate case labeled as ‘92 women in Sindh’s jail facing murder charges.’ In the aforementioned case, according to statistics from a survey cited by the Frontier Post, there were 92 women prisoners in Sindh’s 26 jails who were either convicted of murder or awaiting trial.

The PTI politician Shahbaz Gill’s driver, Izhar, was staying at the home when it was raided by Islamabad police on Thursday, and Izhar’s wife and another person were taken into custody on suspicion of rioting, assaulting a police party, and theft. The change occurs two days after Gill was taken into custody on suspicion of sedition and agitating the populace against state institutions as a result of his contentious comments about the army on ARY News. Izhar, who was accompanying Gill when he was taken into custody at Banigala Chowk in Islamabad, asserted that he had experienced assault as a result of the incident. 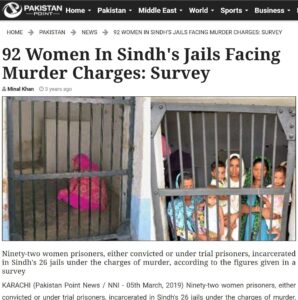 In the FIR filed against Izhar and others, police claimed that Gill, who has been remanded in custody, disclosed during questioning that he had given his mobile phone to his driver/assistant, Izhar, at the time of his arrest. The phone contained a significant amount of information regarding the case against him. According to the FIR, he told police that Izhar was still using his phone and living with his in-laws. Following this admission, a special raiding team was organized, and on Thursday at 1:40 am, it proceeded to Izhar’s home. According to the FIR, when the door was knocked, a man and a woman emerged from the residence.

Maryam Nawaz wept during a meeting after loss: Shahbaz Gill

The man introduced himself as Izhar Ullah, while the woman introduced herself as Mehreen, his wife. After spotting the police party, the FIR claimed that both of them started making a racket and called five to six additional individuals from inside the residence. They all attacked the police party, made a fight of it, started raising a commotion, and threatened the police party. More individuals gathered at the scene as a result, according to the FIR. Izhar’s wife and his relative Noman were brought before an Islamabad sessions court later that day, and attorney Faisal Chaudhry filed a request for bail on their behalf. 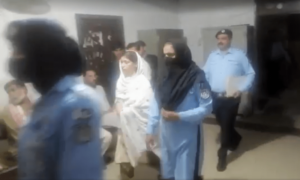 The attorney introduced the case by stating that Saira, not Mehreen, was the name of Izhar’s wife. Today, Chaudhry asked the court to release Izhar’s wife on bail and to see the situation as a “unique instance.” The judge, who had earlier stated that no case was unique to him, then approved Nauman’s two-day physical remand while also sending Saira to jail on judicial remand. He added that tomorrow’s (August 12) hearing on Saira’s bail application would take place and that during that time, police would be permitted to look into and question the suspects.