Google Error showing USD at Rs 207.10 instead of Rs 243 boggles Pakistanis across the world 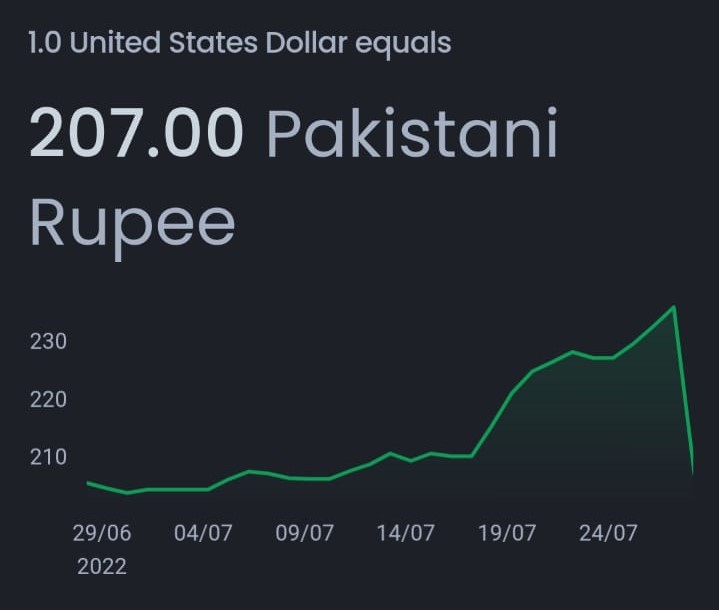 People on the internet are perplexed after a Google error started displaying the Pakistani Rupee’s exchange rate for the US Dollar (USD to PKR) as Rs. 207.10 on July 28, 2022.

The local currency hasn’t recovered, though, and Google’s error in reporting the erroneous conversion rate is all that’s happened. Note that on July 28, 2022 (Thursday), the Pakistan Rupee (PKR) reached a record high of Rs. 240 during intraday trading before falling to a record low of Rs. 239.94 in the interbank market against the US Dollar (USD). The dollar’s open market price has already crossed Rs. 245.

The Pakistani Rupee has been among the worst performing currencies in the world, falling about 8% versus the US Dollar in the most recent trading week as concerns about the country’s economy grow in the midst of the ongoing political crisis. In the meantime, with inflation at its highest point in more than a decade, the foreign reserves have decreased to below $10 billion. However, due to a Google malfunction that displayed the current rate as Rs. 207.10, the public was left in the dark regarding the exchange rate of the Pakistani Rupee versus the US Dollar (USD to PKR).

According to former finance secretary Dr. Waqar Masood in an interview with Geo News, the pressure on the rupee is caused by a number of factors, including the delay in the revival of the International Monetary Fund’s (IMF) program, the disclosure of the financing gap, and the results of the July 17 by-elections in Punjab.

Gold price in Pakistan breaks record at Rs 143,600 per tola

Analysts believe that Pakistan’s economy is constantly at risk from political instability. As a result of mounting concerns over Pakistan’s funding requirements, a sizable current-account deficit, and persistent inflation, the local currency will continue to face significant pressure. According to Tahir Abbas, the head of research at Arif Habib Limited, currency pressure persisted today as well due to increased dollar demand, outflows (mostly connected to oil payments), and reduced inflows. As the rupee has lost 33% of its value against the dollar since January of this year, Pakistan’s foreign exchange reserves have shrunk to $9.3 billion as of July 15, and inflation is at its highest point in more than ten years, concerns about the country’s ailing economy have grown. The dollar is getting stronger in comparison to every other world currency on the market, and the rupee is no exception. Pakistan’s foreign account issues have not yet been rectified, despite declining imports. The IMF has agreed to disburse a $1.2 billion loan, but because the executive board has not yet given its final sanction, the inflows have not yet started.