The internet community asserted that artificial intelligence was used to edit the video such that the president’s visage was superimposed on the body of an actor. President Biden discusses the 6th January riots, which saw demonstrators rush the US Capitol building, in the 17-second video. A congressional subcommittee is presently investigating the riot.

On Wednesday, the Democratic Party’s official Twitter account posted a video that swiftly spread into a larger conspiracy theory. Thousands of users have shared posts questioning the validity of the footage, including well-known analysts from the right-wing US television networks Newsmax and One America News.

People have questioned the authenticity of the video for a variety of reasons, including claims that President Biden appears differently in another video that was also released on the same day and is thus fabricated. But the lighting employed during filming is what caused the changes in his appearance. He doesn’t blink, which some think makes the video questionable, but that doesn’t confirm it’s a deepfake. 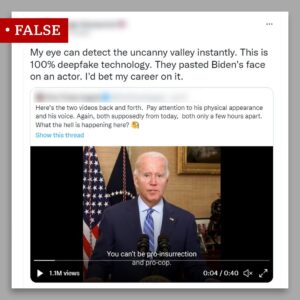 The tweet ‘A regular individual blinks their eye 15 to 20 times a minute’ has been retweeted approximately 40,000 times. Although the average person blinks 12 times per minute, it is completely possible to go longer than the 17 seconds shown in this video without blinking. The Democratic Party tweeted a video of President Biden, but it was edited halfway through, so he wasn’t maintaining constant eye contact the entire time. The White House has released an extended version of the film, in which the president can be seen blinking repeatedly.

Deepfakes also can blink. Many people mistakenly believe that the fact that a deepfake does not blink makes it easy to detect. Although a poorly built deepfake would not blink, that does not always mean that it is a deepfake, says Sam Gregory, a deepfakes specialist. There have long been false rumors that President Biden is a hologram, a CGI creation, a deep fake, a mask-wearing clone, a body double, or that his recordings were done in front of a green screen. They have been bubbling on the perimeter of the internet for a while, and occasionally they have gone viral. Other foreign leaders, including former President Donald Trump, have been the subject of similar baseless accusations. Back in March 2021, rumors that President Biden was photographed in front of a green screen caused a video of him responding to inquiries from reporters in front of the White House to go viral. Most of the people making these assertions think that the White House is using such complex tactics to hide the president from the public due to his advanced age, poor health, or embarrassing public blunder.