In a community in northern Ukraine that was just destroyed by Russian troops, a techno party is in full flow.

More than 200 young people have discovered a fresh approach to helping their nation rebuild in a bombed-out building.

Young Ukrainians who planned the midday ‘cleanup rave’ in Yahidne helped with the recovery operations in the country’s north, which has been severely destroyed by Russian bombardment.

Volunteers remove the wreckage of a cultural village center with spades after it was obliterated by a Russian missile attack in March and its debris was dumped onto a tractor loader. While the volunteers are at work, a DJ spins techno and house dance music on turntables erected on a stack of ammo boxes. Some people even stop working to dance. Tania Burianova, one of the leaders of the Repair Together program, declared that volunteering had become a way of life. She further continued that she enjoys electronic music, and she enjoys having a good time. However, since it is a time of conflict, they use music to help. On July 24, 2022, a DJ performs techno music as young volunteers clean up the debris left by a building that was hit by a Russian missile in the Ukrainian settlement of Yahidne. The Russian invasion on February 24 abruptly put an end to Ukraine’s vibrant nightlife scene. Now that Kyiv, the country’s capital, is under a curfew and faces an increased risk of Russian rocket assaults, followers of Ukrainian party culture have sought to combine the joy and freedom of a music festival with helping to restore their beloved nation.

According to Burianova, the cleanup events bring together people who lost their nightclub community as a result of the conflict, enabling them to rediscover joy and normalcy while aiding in the reconstruction of destroyed communities. The 26-year-old Burianova stated that they miss parties and want to return to normal life, but their normal life is now volunteering. On the borders of Yahidne, where almost all of the village’s little over 300 residents were imprisoned in a cellar for weeks by Russian troops during their siege of the northern Chernihiv province, sits the destroyed cultural center. 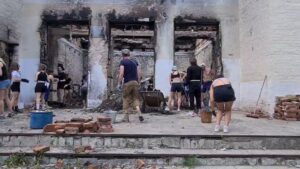 Nina, a 68-year-old local, recalled spending those dreadful weeks in the basement before the Russian troops’ withdrawal, where 11 people perished as a result of the inadequate conditions. She was happy to see young people working to rebuild the village. The volunteers, according to Nina, have already made repairs to the windows, doors, and entrances. With their wages and pensions, they couldn’t afford to do it ourselves.

She’s appreciative of their assistance. The majority of the volunteers, who were in their 20s and 30s, came from Kyiv, which was roughly two hours away. Some foreign volunteers arrived from Portugal, the United States, Germany, and other countries, while others came from the western city of Lviv and the adjoining town of Chernihiv.