The Royal Mint, the authorized manufacturer of UK coinage, has released the image of King Charles III that will appear on those coins.

According to a statement from the Royal Mint, British sculptor Martin Jennings created the portrait, which will initially appear on commemorative £5 and 50 pence coins to celebrate the life of the late Queen Elizabeth II. The monarch also gave her approval to the design.

According to custom, the King’s image will be facing to the left, away from his mother. King Charles III, by the Grace of God, Defender of the Faith is written in Latin script around the portrait as “• CHARLES III • D • G • REX • F • D • 5 POUNDS • 2022.” 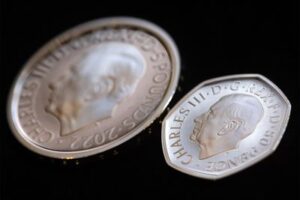 In the release, Jennings was quoted as saying that it was an honor to sculpt the first official effigy of His Majesty and to obtain his approval for the design. The legendary effigies that have graced Britain’s coins over the years served as inspiration for the picture, which was sculpted from a photo of the King. Although it is the smallest thing he has ever produced, it is humbling to realize that people will view and hold it for generations to come. The 50 pence coin will go into widespread use in the upcoming months, according to the Royal Mint. Two new pictures of Queen Elizabeth II created by artist John Bergdahl will be on the reverse of the £5 coin. A pattern that was first seen on the late Queen’s 1953 Coronation Crown coin will be featured on the back of the 50 pence coin. It will have a shield with the four quarters of the Royal Arms. There will be a rose for England, a thistle for Scotland, a shamrock for Northern Ireland, and a leek for Wales between each shield. According to Kevin Clancy, director of the Royal Mint Museum, Her Late Majesty Queen Elizabeth II has graced more coins than any other British monarch in a reign that lasted for 70 years. As we go from the Elizabethan to the Carolean era, there will be the biggest change in British currency in decades and many people will be seeing a new effigy for the first time.