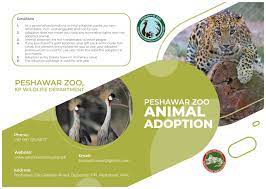 The Peshawar Zoo has begun an “animal adoption drive,” which is an extraordinary move that the zoo’s administration thinks will raise public awareness of animal welfare.

As previously stated in the media, management’s inability to adequately care for caged animals owing to a lack of cash prompted the launch of the animal adoption campaign. However, the administration told The Nation that the campaign aims to inspire people to care for animals and birds. Muhammad Niaz, the director of the Peshawar Zoo, told this reporter that the zoo’s needs could not be met by tickets or other means.

How may adopting animals and birds for a few thousand rupees a year provide enough income to address financial problems? The director claims that the zoo’s animals and birds don’t require such an adoption campaign because they already receive funding from the government and require much more. Zoo lovers would be able to adopt any animal or bird pet of their choosing at the Peshawar Zoo for an annual fee as part of the ongoing adoption drive. Any pet that animal enthusiasts would like to see kept and cared for at the Peshawar Zoo can be adopted. With the help of the “animal adoption campaign,” it will be feasible to feed rare breed animals and birds well so they can procreate.

The adoption campaign offers the chance to adopt a variety of creatures, including lions, tigers, monkeys, zebras, peacocks, parrots, francolins, ostriches, and many more. Compared to huge animals like tigers, zebras, deer, and monkeys, adoption costs for birds range from Rs 5, 000 to Rs 20, 000 per year to between Rs 25,000 and Rs 200, 000 per year. The management of the zoo claimed that animal adoption programs run by zoos throughout the world were inspired, thus they decided to start a comparable program at the Peshawar Zoo.

The first animal to be adopted as part of the initiative is a rare francolin from the Peshawar Zoo. Another individual had also applied to adopt an animal the next week, the zoo director revealed. It is not possible to cover the Rs 3 million monthly cost of the zoo through adoption. He did point out that the adoption was meant to promote a love of animals and birds.