Owners of Manchester United Considering to sell off the club 17 years after the Glazer family purchased the club, the American owners of Manchester United (MANU.N) have started to consider their options for the 20-time English soccer champions, including a new investment or a prospective sale.

According to a statement from the Old Trafford club, the Glazer family is working with financial consultants on the process, which might lead to investments like redeveloping the stadium and infrastructure or selling off portions of the team. As the team, which has a record 13 English Premier League titles, has gone five years without winning a trophy, Manchester United supporters have been calling for a change in ownership and the Glazers have come under heavy fire. The League Cup and Europa League were their most recent victories in 2017.

The board has approved a thorough investigation of strategic alternatives, United’s executive co-chairmen and directors Avram Glazer and Joel Glazer said in a statement as they sought to maintain the club’s record of success. According to the statement, they will look into every option to make sure they are serving their fans in the best way possible and that Manchester United is making use of all of the club’s current and potential future development opportunities. Its sale could draw the attention of prominent investors. British businessman Jim Ratcliffe, a devoted supporter of the team, had indicated an interest in purchasing United in August, according to Reuters. Elon Musk had also made light of his intention to purchase the club at the time. Ratcliffe, who serves as chairman of the chemical company INEOS, declined to comment on Wednesday.

Building on the more than 14% increase on the announcement of the sales process on Tuesday afternoon, Manchester United shares increased as much as 10% in premarket trade on the New York Stock Exchange. Despite relatively low trades, its Frankfurt-listed shares increased 7.2% to their highest level since September 21. At the end of Tuesday’s U.S. trading, the business had a market value of $2.5 billion, although the shares are only marginally higher than their IPO price of $14.

In 2018, the club’s market valuation as a public business reached its peak of $4.3 billion. Asian businessmen, particularly those from China, have begun buying European sports franchises recently, including Wolverhampton Wanderers of the Premier League and Inter Milan of Italy. But now that China has decided that football clubs are undesirable assets, any sizable international acquisition appears improbable, according to Beijing-based author Mark Dreyer, who wrote “Sporting Superpower,” a book about China’s aspirations in the sports world. In the current environment, he asserted, it is nearly impossible to see how any Chinese-related organization could justify a purchase of this magnitude. 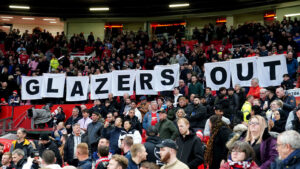 He cited the negative economic effects of China’s ongoing fight to limit COVID-19 infections. No state agency would sanction this kind of agreement. United is now placed fifth in the Premier League, which has been suspended due to the ongoing World Cup in Qatar, putting pressure on the Glazers, who also own the Tampa Bay Buccaneers of the National Football League.