“Gaslighting” – Merriam-Webster Word of the Year for 2022

The term “gaslighting,” which Merriam-Webster describes as “the act or practice of excessively deceiving someone, especially for one’s gain,” was named the word of the year for 2022 on Monday.

According to queries made in the online dictionary, interest in the term has increased by 1,740% over the previous years. In contrast to other well-liked terms, searches for “gaslighting” were consistently high throughout the year as opposed to peaking at specific times like some of the other nominees for word of the year.

According to Peter Sokolowski, Merriam-Webster’s editor at large, it’s a word that has risen so swiftly in the English language, especially in the last four years, that it came as a surprise to me and many of us. Every day of the year, it was a word looked up regularly, he continued. The phrase has been increasingly popular recently as editorials, podcasts, and TV programs attempt to evaluate relationships and particularly more subtle types of abuse using a more psychological perspective. But its popularity among users of online dictionaries is also probably due to its occasionally ambiguous and convoluted meaning.

According to Merriam-Webster, the most common definition of “gaslighting” is a type of psychological manipulation that causes the victim to question the validity of their thoughts, perception of reality, or memories and typically leads to confusion, loss of confidence and self-esteem, the uncertainty of one’s emotional or mental stability, and a dependency on the perpetrator. The term is reminiscent of a 1930s drama that was later turned into a motion picture. Ingrid Bergman, Charles Boyer, and Angela Lansbury portrayed an abusive romantic relationship in the 1944 film Gaslight, in which the husband maintains that his wife’s complaints about the constant dimming of the gaslights in their home are nothing more than her imagination.

The other major hits of the year were more closely related to particular incidents that prompted individuals to look up phrases that were making headlines. In response to penalties against Russian billionaire, Kremlin backers after Russia invades Ukraine, searches for “oligarch” increased by 621%. The website also observed an increase in searches for the terms “codify” and “raid” in the wake of the US Supreme Court’s decision to overturn the Roe v. Wade abortion protections, as well as “Queen Consort” in the wake of Queen Elizabeth II’s passing and King Charles and his wife Camilla’s ascension to the throne. 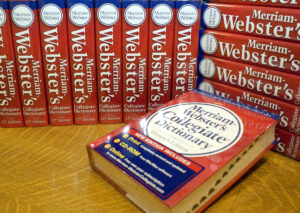 Every month, Merriam-Webster records about 100 million page views. The venerable dictionary chooses its word of the year purely based on facts, without taking into account the possible motivations behind a certain term’s use.