The police on Wednesday described reports circulating on social media about the alleged gang-rape and grisly murder of a woman in a textile factory in the Korangi area of Karachi as ‘fabricated’ and ‘baseless.’ In the ‘fake’ stories, the incident is being made to go viral by linking it to a leading denim fabric and apparel manufacturing factory in Korangi, he added. The police officer replied that no such incident occurred in any factory in the region.

He claimed that the police have started looking into the situation and promised to take strict action against those responsible for disseminating false information on social media. In a statement, SSP Korangi said that sub-divisional police officers conducted an inquiry into the matter and reported that no evidence of the allegations leveled by a web channel was found. The statement stated that it was an attempt to harm the business’s reputation. The Korangi Association of Trade and Industry, meanwhile, also expressed its deep concern regarding the accusations made against the reputable business. 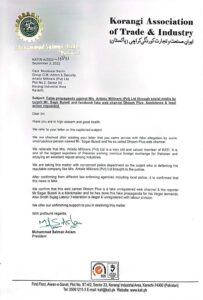 We want to emphasize that M/S Artistic Milliners (PVT) Ltd is a seasoned and cherished KATI member. It is one of the leading exporters of Pakistan earning precious foreign money for Pakistan and having a great repute among industries, said the statement. It issued a warning and stated that they were raising the issue with the relevant police agency to bring the person responsible for disparaging the renowned company to justice. 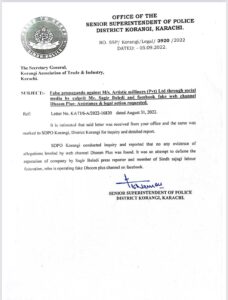 At the incident, the Unit 4 manufacturing employee was allegedly asked to work extra hours, drugged, and then raped by 20 to 22 men over the course of the night in the HR department. She was then tortured by having cigarettes placed on her bare skin while they were on fire. According to the tweets, she struggled to exit the building around 6 am but died outside the working grounds. A different tweet claims that woman passed away following a rape. The specifics of the case have not yet been verified.

SP Fahad Mustafa in the house!

A lot of individuals have also said that because the company has a lot of international customers, it is utilizing its power to bury the awful catastrophe in the most inventive ways possible. Artistic Milliners, a vertically integrated denim company, places a high priority on the progress of women, innovation, and sustainability. But the claims and tweets directed toward the group reflect a different picture.