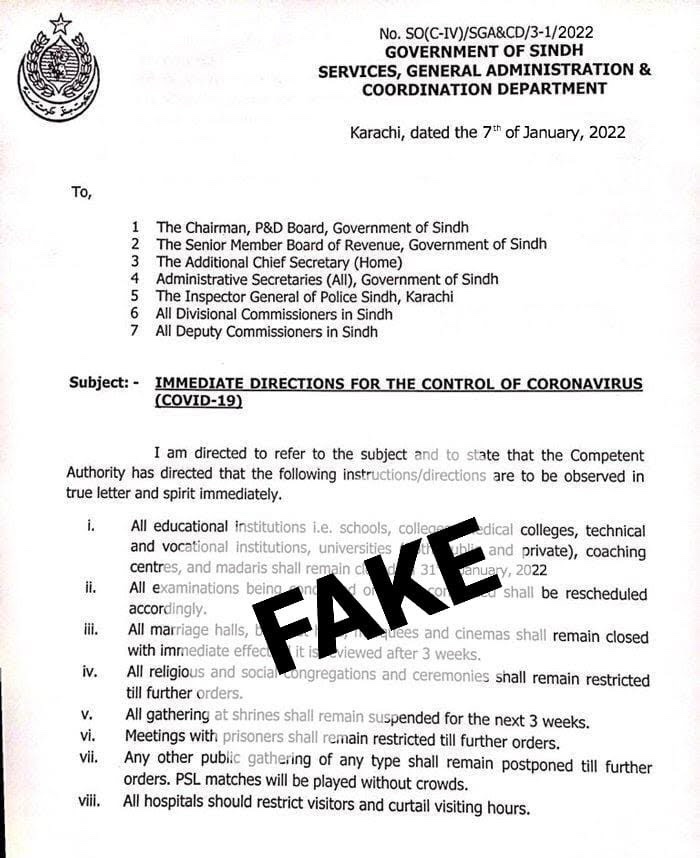 The Sindh administration has dispelled all rumours about the province’s new coronavirus limitations. A doctored notification made the rounds on social media on Friday.

The Sindh government clarified that the notification circulating on social media regarding COVID-19 restrictions in the province is “fake” and no such directives have been issued.

Please be wary of photoshopped images that are spreading fake information during the pandemic. This document is fake & no such notification has been issued from the Sindh Government or Sindh Health Department. If forwarded to you, inform the sender it is inauthentic #SindhHealth pic.twitter.com/ZjKcXL0HMv

So yet, no such directions have been approved by the government, according to a spokesperson for the Sindh Health Department who talked to SAMAA Digital.

“During the pandemic, be aware of altered photographs that are spreading false information. This document is a forgery, and no such notification from the Sindh Government or the Sindh Health Department has been issued. “Inform the sender that it is inauthentic if sent to you,” the department tweeted later in the day.

On Friday, Pakistan recorded more than 1,000 coronavirus cases for the second day in a row. According to the National Command and Operation Centre, the national positivity rate has risen to 2.5 percent.

Coronavirus cases are on the rise again, due to the recent Omicron variant. After their positive ratios grew to 10.25 percent and 5.7 percent, respectively, Karachi and Lahore became the most affected cities.

Within 24 hours on Friday, over 600 new cases were reported in Karachi, with two people succumbing to the infection.

Omicron, on the other hand, has taken over Lahore. On January 7, twenty-one cases of the new variant were recorded in a single day. All major hospitals in Punjab have been declared emergency by the health authorities.

In the last 24 hours, 109 new cases were reported in Islamabad, with 34 of them being of the new strain.

According to experts, Omicron is displacing other varieties in the city and is highly highly infectious.

NCOC chairman Asad Umar told Geo News on Thursday that Pakistan is not considering a lockdown for the time being. “Increasing the rate of vaccination, as well as the doses, should be our primary goal.”

Dr. Azra Pechucho, Sindh’s Health Minister, has also stated that the decision to impose a lockdown in the province is based on the province’s hospitalisation rate.