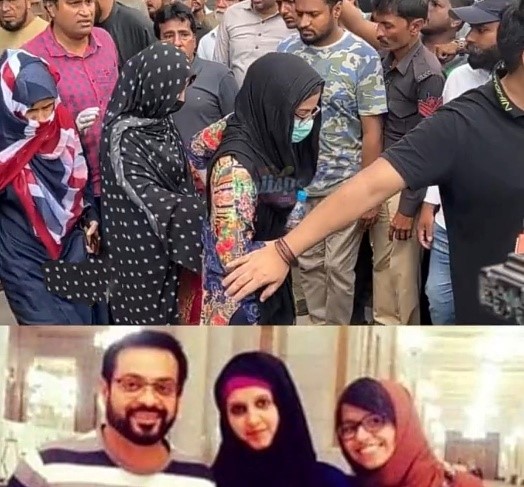 Bushra Iqbal, the mother of Aamir Liaquat Hussain’s two children and ex-wife, declared on Friday that she would report his widow Syeda Dania Shah and her mother for cybercrime.

Iqbal said on Twitter that the family will file a complaint against Hussain’s wife and mother-in-law with the Federal Investigation Agency’s (FIA) Cyber Crime Cell. She shared an image of an invocation to seek protection from evil eyes. We will submit a complaint in the FIA Cyber Crime today against Dania Shah and her mother. Prayers needed, she tweeted.

Today we are going to file an application in FIA Cyber Crime against Dania Shah and her mother.
Need prayers. #AamirLiaquat pic.twitter.com/RJcy94T3NS

Iqbal withheld all information on what was included in the application. It should be remembered that on July 19, the late PTI MNA’s third wife Shah submitted a request to the Sindh High Court to join Hussain’s children in their fight against the exhumation of their father’s body and the autopsy orders. She has asked the court to perform an autopsy on her deceased husband. While Shah’s mother maintains that whatever inheritance Liaquat has left now goes to her daughter. The late televangelist and politician Aamir Liaquat Hussain’s daughter Dua Aamir has disclosed the details of her complaint to the Federal Investigation Agency (FIA) against her father’s third wife, Dania Malik. After a fight with Dania, the well-known TV host’s domestic tapes were published on social media, which caused him mental anguish, and he was discovered dead at his Karachi house on June 9.

Speaking to the media, Dua stated that although they had planned to file a case against Dania, they were forced to do so right away because she had joined the postmortem case as a party. The late politician Aamir Liaquat’s children and first wife are against the autopsy, and the SHC earlier this week stayed a judicial magistrate’s ruling for exhumation in response to their appeal. The high court is still considering the matter, and the next hearing is planned for the following week. They have submitted all of the evidence in the case, Dua said, adding that she hoped the FIA will move against Dania and arrest her shortly.

Netizens have shared their thoughts on Twitter. Twitter user @AmjadJammu tweeted that the non-conduct of the post-mortem of Dr. Aamir Liaquat is also a question mark, in which the obstacle is the wife who prays for the forgiveness of Aamir Liaquat in the morning and evening but is avoiding to know the cause of death.

Another Twitter user @SalmanNasimShad tweeted that it is very important to teach Dania a lesson and we are with you in this initiative. Amir Bhai must get justice.

Twitter user @javerias tweeted to stay strong. We are with you.

Stay Strong 👌 we are with you.

Twitter user @SabaAjmal6 that she is a lawyer, and has already submitted an application to the FIA in Lahore against Dania Shah. She is putting a lot of effort into ensuring that (late) Dr. Amir Liaquat Hussain receives justice, and a petition under Section 22(a) for the registration of an FIR against Dania Shah is also pending.