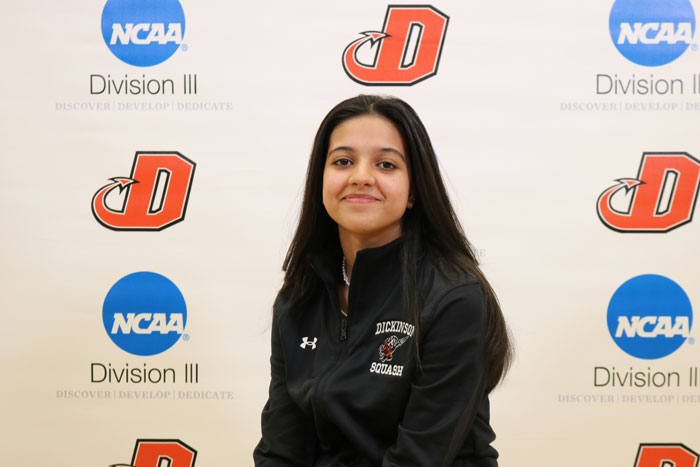 Amna Fayyaz, a 24-year-old squash player from Dickinson, has been chosen to represent Pakistan at the forthcoming Commonwealth Games, which get underway in Birmingham, England, on July 28.

Fayyaz, who previously won the 2021 Female Emerging Star of the Year at the Pakistan Sports Awards, said she is thrilled and appreciative of the opportunity to represent her country. She has had this as a great ambition and dream, and she is thrilled to take part in such a huge platform. She wants to express her gratitude to her team at Dickinson and her home for their help.

The Commonwealth Games, which were first held in 1930 and are now held every four years, are an international competition amongst the 54 states that make up the Commonwealth of Nations, a grouping of 56 countries with 2.5 billion people in North America, Asia, Europe, Africa, and larger Australia. As a Red Devil this season, Fayyaz—currently rated first in Pakistan—was selected for the First-Team All-Mid-Atlantic Squash Conference after going 15-5 while playing at the top. At the College Squash Association team championships, the Islamabad native carried her momentum from a good regular season into the postseason by winning three straight matches. To help Dickinson get to the Walker Cup final, Fayyaz summoned down the top players from St. Lawrence, Franklin & Marshall, and William Smith.

The Dickinson community as a whole is immensely proud of Amna, said Red Devil squash head coach Richard Glanfield. This is a great accomplishment for her, not just because she got to represent her nation but also because she did it at the Commonwealth Games, which is a very important competition. We hope for the best for her.

On the other hand, India’s Sunayana Sara Kuruvilla defeated Pakistan’s Faiza Zafar 3-0 in the women’s singles plate semifinals of the Commonwealth Games squash competition on Tuesday at the squash court at the University of Birmingham. The final score was 11-2, 11-4, and 11-5. Several of the competitors from Pakistan were disqualified from the medal race on the first day of the Commonwealth Games 2022, therefore they were unable to shine. On July 28, the 12th Birmingham Commonwealth Games got underway, although several Pakistani participants struggled in several categories and failed to make an impression.

Mohammad Afzal, a national gymnast who participated in three apparatuses, was unable to perform effectively and was eliminated from the medal competition. Salman Baloch, on the other hand, was total defeat by his Indian opponent at boxing. Additionally, both national male and female swimmers were eliminated from the medal race for the swimming competition. Haseeb Tariq, on the other hand, offered a glimmer of hope for the medal after taking first place and winning the first round, but finishing 35th in the final. However, the national badminton and women’s cricket teams are yet to begin their competitions in the international competition.