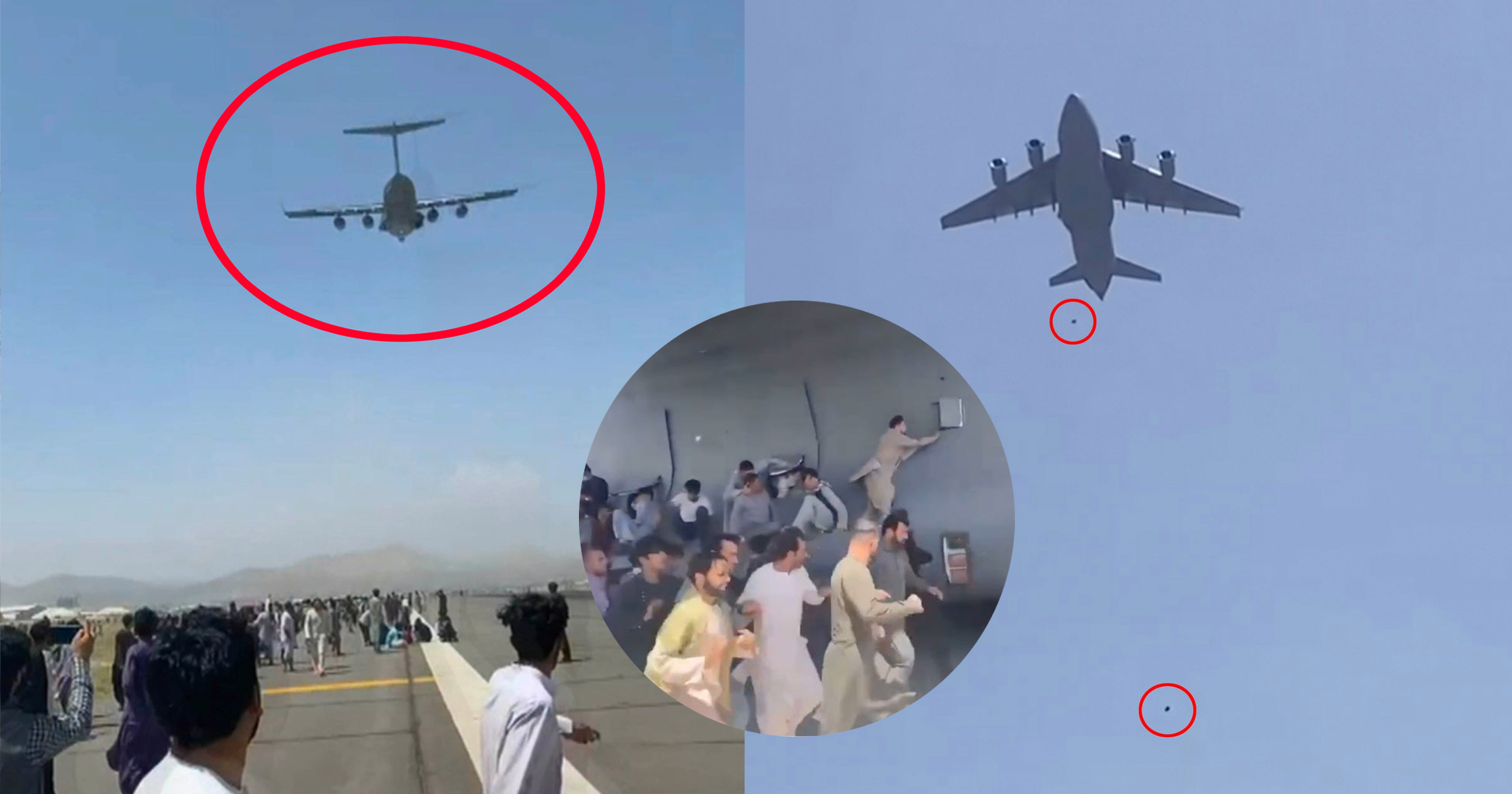 KABUL: Amid the chaos in Afghanistan capital, harrowing footages have surfaced showing desperate Afghan nationals who have fallen to death after clinging to jets in an attempt to escape the country which is now under Taliban rule.

Reports in Afghan media quoting eyewitnesses said three Afghan citizens held on to a wheel of a flying out jet at Kabul international airport and were seen falling on top of people’s houses while another fall on the runway.

Afghan news agency Asvaka shared the distressing clips on a microblogging platform. Quoting local residents, it said that the ill-fated people also screamed in a terrific way just before hitting the ground.

Exclusive- A clear video (from other angle) of men falling from C-17. They were Clinging to some parts of the plane that took off from Kabul airport today. #Talibans #Afghanistan #Afghanishtan pic.twitter.com/CMNW5ngqrK

In another clip, the dead bodies of three people [two men and a woman] can be seen on the ground however it is unsure if the deceased died by falling or the other way.

A clip shared by TOLO news captured hundreds of people running alongside the jets just before the takeoff at Kabul international airport earlier today. Others can be spotted hanging on to the side of the US aircraft’s wing.

Video: People run on tarmac of Kabul international airport as a US military aircraft attempts to take off. pic.twitter.com/9qA36HS0WQ

The tragic events following the Taliban takeover are a defining symbol of the US failure in Afghanistan.

The chaos and unseen panic occurred despite reassurances from Taliban representatives that there would be no reprisals against the civilians. The fear among the residents stemmed from the earlier years when the Taliban ruled in a brutal way.

On Sunday, the insurgents took over the control of the Afghan capital as they moved into the presidential palace after President, Ashraf Ghani, managed to escape the war-torn country. The 72-year-old fled the landlocked country before the insurgents’ reportedly to Tashkent.

He later shared a post on his official Facebook clarifying that he fled in a bid to ‘prevent bloodshed in the capital’. Ghani further added that the Taliban have won with the judgment of their swords and guns, and are now responsible for the honor, property, and self-preservation of their countrymen.

Meanwhile, amid the devastating situation in the South Asian country, all commercial flights were suspended in wake of the security situation. Britain, France, Germany, and the Netherlands, along with all Nato members, said they were pulling their diplomats out of their embassies.

Before capturing the capital, the Taliban took Jalalabad, without resistance, taking control of one of the main highways that linked with Pakistan. The nearby Torkham border post is also under Taliban rule as Afghan forces surrender without involving in any skirmishes.

Taliban spokesperson Mohammad Naeem while speaking with an international news outlet said they we have achieved what we were seeking and that is the freedom of our country and the independence of our people.

He went on to say that ‘We will not allow anyone to use our lands to target anyone, and we do not want to harm others,” Naeem said by adding that we do not think that foreign forces will repeat their failed experience in Afghanistan once again.”